Everyone is different. It’s one of the first things that you learn with your breast cancer diagnosis.  From the type, stage and grade to the treatments you receive and to the choices you make. Whether or not to proceed with breast reconstruction may be one of those choices. It is so intensely personal and it is so clear that there is no right or wrong.  I researched  – searched online, read books, talked to women who had reconstruction and to those who chosen not to proceed. I met with a plastic surgeon and talked to doctors. I considered developing a matrix to assist other women with their decision and that may be my next post. In the meantime I’ll share with you the defining factor for myself which I was happy to discover:  my teddy.  I received my teddy from my grandmother when i was a baby.  I carried him every where. Teddy is now 55 years old. 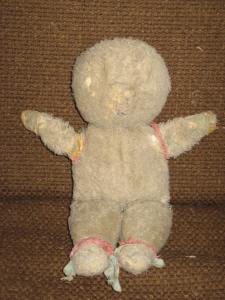 The remnants of pink and light blue that  are visible around his arms and feet was from the material lovingly sewn or crocheted by my grandmother to give Teddy extended life and protection from my onslaught of affection as a young child. He went everywhere with me.   I should have placed something beside him in this photo for context.  Teddy is 10 inches tall.  He used to have ears and a face.   Part of me can conjure an image of how he used to be.  But it is a fleeting glimpse. When my grandmother attempted to sew new button eyes on to him, i balked.  They were never quite right. They changed him. Once these features were lost, they could never be replaced to my satisfaction. It was disturbing to me. I preferred the vivid memory in my head. I had my answer on reconstruction.

breast cancer can be liberating

no more holding back

Breast cancer can be liberating. Yea really! Time to face your mortality head on and live life out loud – nothing less.  With an 88% five year survival rate, many women I’ve talked to will venture to say that breast cancer is one of the best things that ever happened to them – despite excruciating treatments, lost hair, maimed bodies etc.  No more holding back.  You go girls!  (Thank you again Gary Larson for another great cartoon.)

joys of waking up each morning

Yesterday I learned of a friend’s discovery of a recurrence of breast cancer and that another friend is near the end.  I woke up this morning with tears and inspiration.  If I ever stop waking up with the inspiration part, I’ll know I’m in trouble.  I have modified one of my favourite Gary Larson Cartoons, thank you Gary http://www.thefarside.com

When I had only a few weeks to decide if I wanted to do reconstruction at the same time as my scheduled mastectomy, I  asked questions: “how many women are going through this?  What percentage of women who have breast cancer end up with a mastectomy, and of those, how many pursue reconstruction?”

I searched, and once again, there were no ready answers.  I got the feeling, when I elected to pass on reconstruction, at least for now, that I was in the minority.  What was I, nuts?  Here I was at one of the top cancer centres in the world, with great doctors and I was passing up this great opportunity?  Was I the only one? Would it have made a difference to my decison if I’d had the numbers?  Probably no, but I may not have anguished so much about it.

Accessing provincial medical data bases for the information did not appear to be a speedy option.  So I asked a group of women that I have been involved with for many years – the Canadian Federation of University Women www.cfuw.org with close to 10,000 women members across Canada.   While there was no available  data to confirm the ages of these women, one could surmise from various meetings that these are women who are in the  “prime” breast cancer  age range.

Uniboobmom would like to share the online survey results from about 1,200 women,  ages 35+, 93% with a university degree or higher.  This survey in June/July 2011 yielded the following results:

23% of respondents said they have been diagnosed with cancer (any), 10% or almost half of those, with breast cancer (over the last 30 years).

These rates may be high compared to other figures out there – but again, there are not a lot of stats available.  This group is not a representative sample of the population. These may be women with greater access to screening and cancer centres.  There is research to support that breast cancer may actually favour higher income neighbourhoods. Some may argue that mastectomy rates have fallen but these, like the survival rate, are impacted by earlier screening and detection along with a preference by the hospitals towards “breast conserving strategies” including lumpectomies. (lumpectomy + radiation = mastectomy)

Interesting that one third of the women had a lumpectomy AND a mastectomy.  I’m one of those.  If I were told that over one third of women with breast cancer ended up with a mastectomy, would it have altered my decisions?  Probably not.  I wasn’t ready to lop it off. And remember, every woman is different.  Those stats may not apply to you. They are just a guideline/information sharing.  The whole process including the lumpectomy served to prepare me well for the second surgery a few months later.  And I was grateful for a medical system that put priority on breast conservation.  Approximately 23,000 women per year in Canada are expected to be diagnosed with Breast Cancer (source Canadian Cancer Society statistics 2010).  You are not alone.

“How are you my Uniboob Mom?”  is how my 12 year old son greeted me when I arrived home from the hospital after my mastectomy. It made me laugh out loud. And my new persona Uniboobmom was born.

There’s a lot of information out there on breast cancer:   the types of cancer, the procedures and treatments, risk factors and suspected causes, blogs about women’s journeys, and of course lots of fundraising sites – but there’s very little out there on what you are in for…where you fit in the whole big breast cancer scheme of things.  Maybe you don’t care and that’s fine. But I’m a numbers person and I like context.

The first thing you learn is that every woman’s situation is different and that the doctors don’t have all the answers.  Pretty quickly I determined that as Grade 1, Stage 1 DCIS  I was pretty lucky.  This is hardly a death sentence. Even so, I really welcomed all the good-news stories people shared – like the ones about your friend’s aunt who had a lumpectomy 30 years ago and is fine today. Each anecdote was unconsciously tallied and filed  by my brain for future reassurance.

I discovered that the best and most authentic thing someone could say to me was “I’m sorry you have to go through this”.  I asked “Just how many women are going through this”?  Thankfully I had seen lots of “survivors” at the Weekend to End and knew they were out there. It helped too that my oldest best friend was diagnosed two years before me and had made it through.

While Canadian women 40-49 are likely to represent 10% of all new cancer cases, for new breast cancer cases, the number rises to 15% -Index 151. (source Canadian Cancer Statistics 2010)

I  learned that the biggest risk factor for breast cancer, and many cancers,  is age –  even though Breast Cancer is showing up in  younger women.

Approximately 23,000 women per year in Canada are expected to be diagnosed with Breast Cancer (source Canadian Cancer Society statistics 2010).

And with the 5 year survival rate at 87% (see http://www.cbcf.org)  my guesstimate is that there are easily a quarter of a million Canadian women out there with breast cancer.  You proabably know a few.